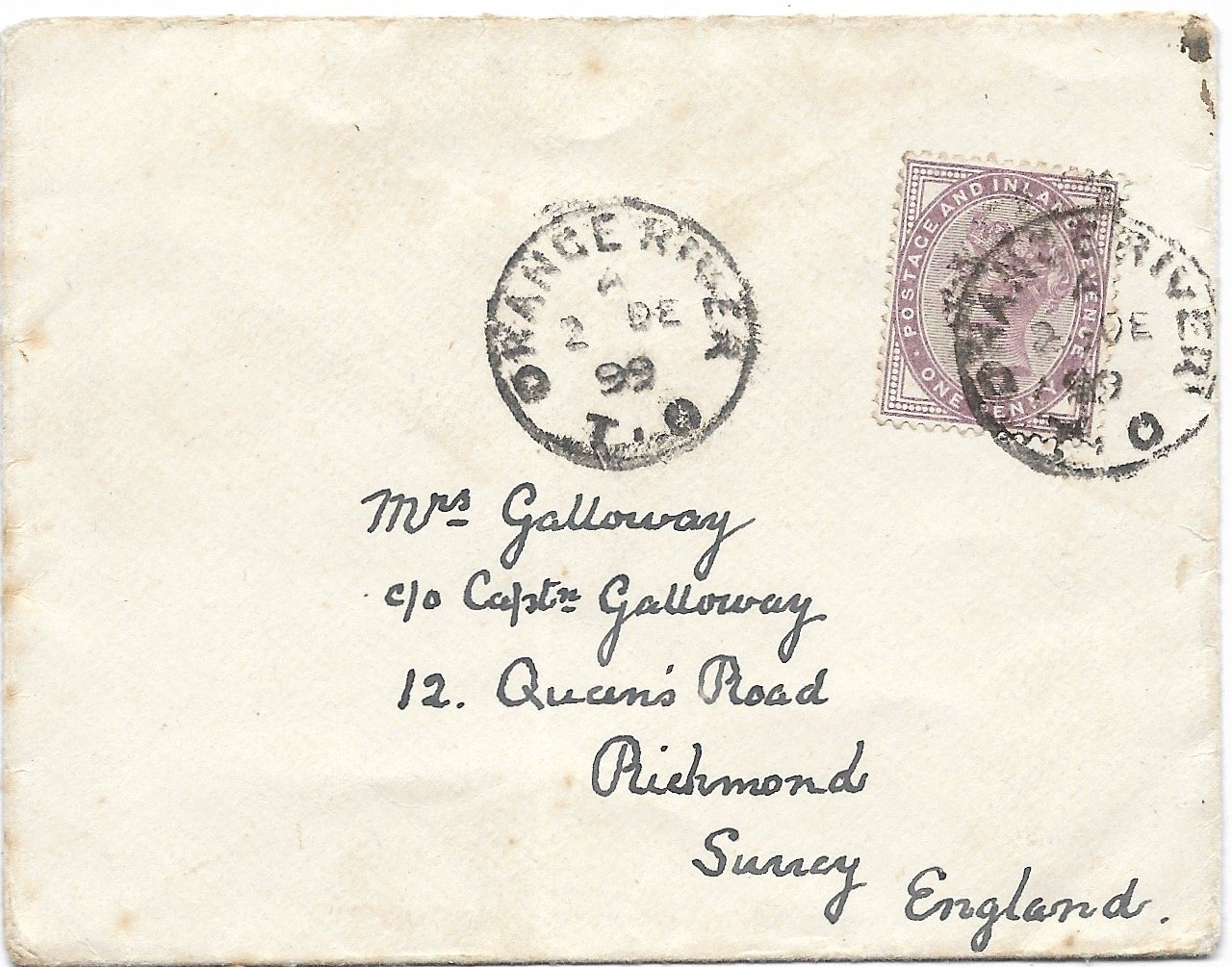 This beautifully addressed letter was accepted at the Telegraph Office at Orange River (Station) on 2 December 1899. The Boer invasion of Cape Colony was held on the river. Here the bridge defended until Roberts moved north to relieve Kimberley in the New Year.

From September 1899, the British Army set up a field post office in the knowledge of the impending war. 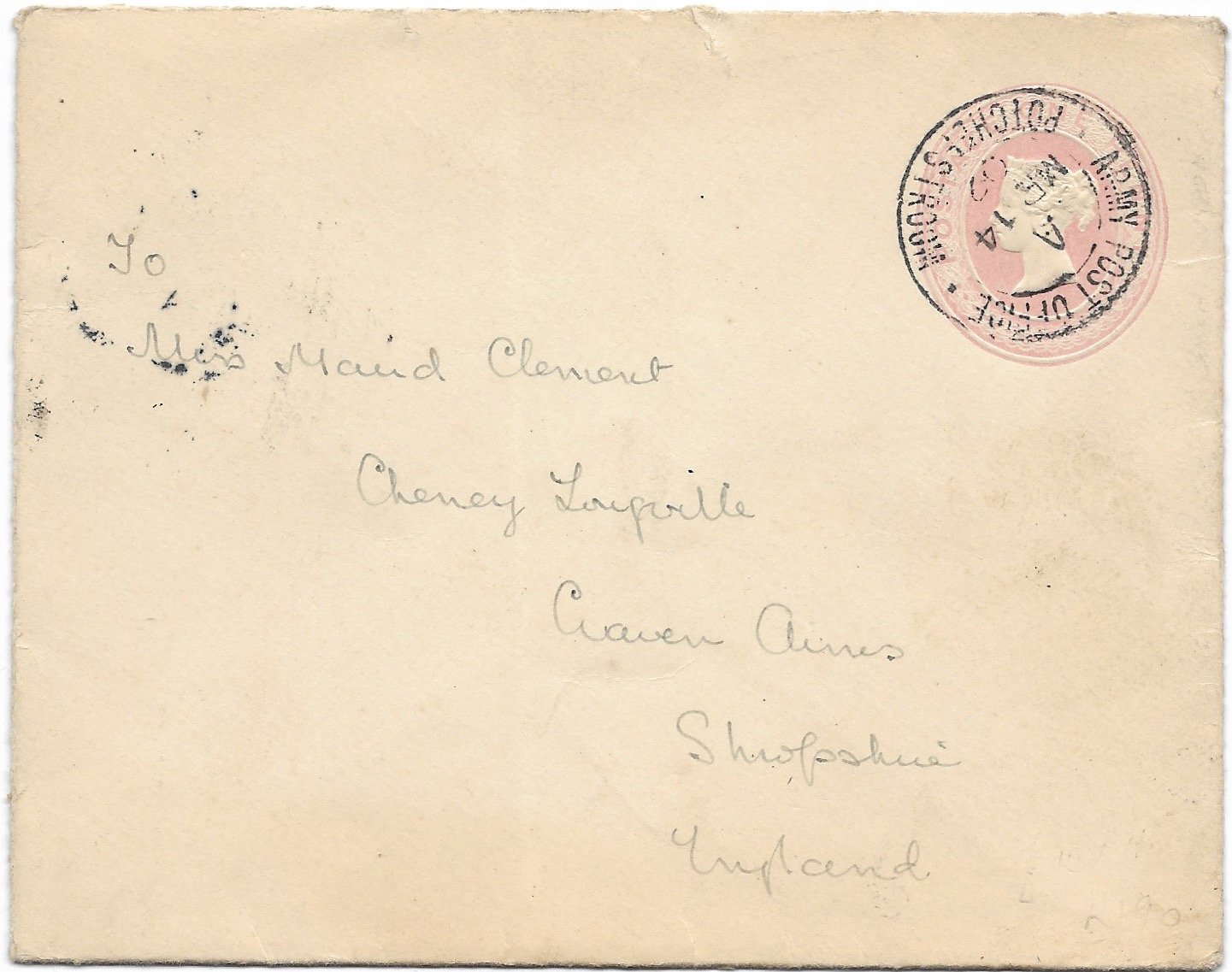 British postal stationery available at Army Post Offices, such as this at Potchefstroom. Posted MR 14 02, received at Craven Arms AP 6 02. Prime type 8. Available to British troops for 1½d including a sheet of paper. 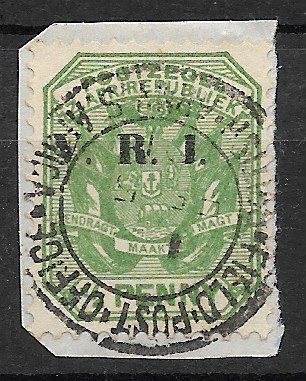 This is a typical cancellation of a Field Post Office S.Africa  but on a ZAR halfpenny stamp overprinted VRI  of 1900 , one of the first types employed in the War

Military use of the civilian post from Pretoria. Example military use though stated as On Active Service. Paid at soldier’s rate of 1d, postage due raised there, tax cancelled in London where red PAID justifies this. 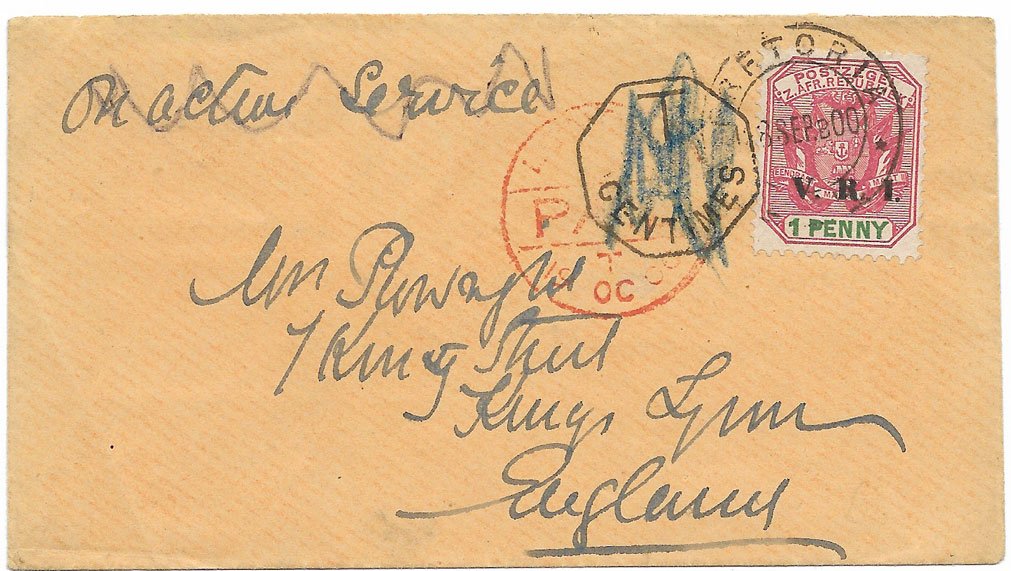 Mail from soldiers in fighting units and support to home countries is a specialised topic involving a knowledge of where post offices were during the initial move to occupy strategic railway lines radiating from Pretoria and Johannesburg.

Boer occupation and sieges of places in the British colonies. Boer field post is found on ZAR postage stamps in colonial areas under they control. Military control by the British using official stationery between government departments was gradually enhanced by civil post from mid June 1900 chiefly along railway lines as British control was established. Former ZAR stationery was initially used, ZAR government ownership duly cancelled and replaced by English, such as OHMS. 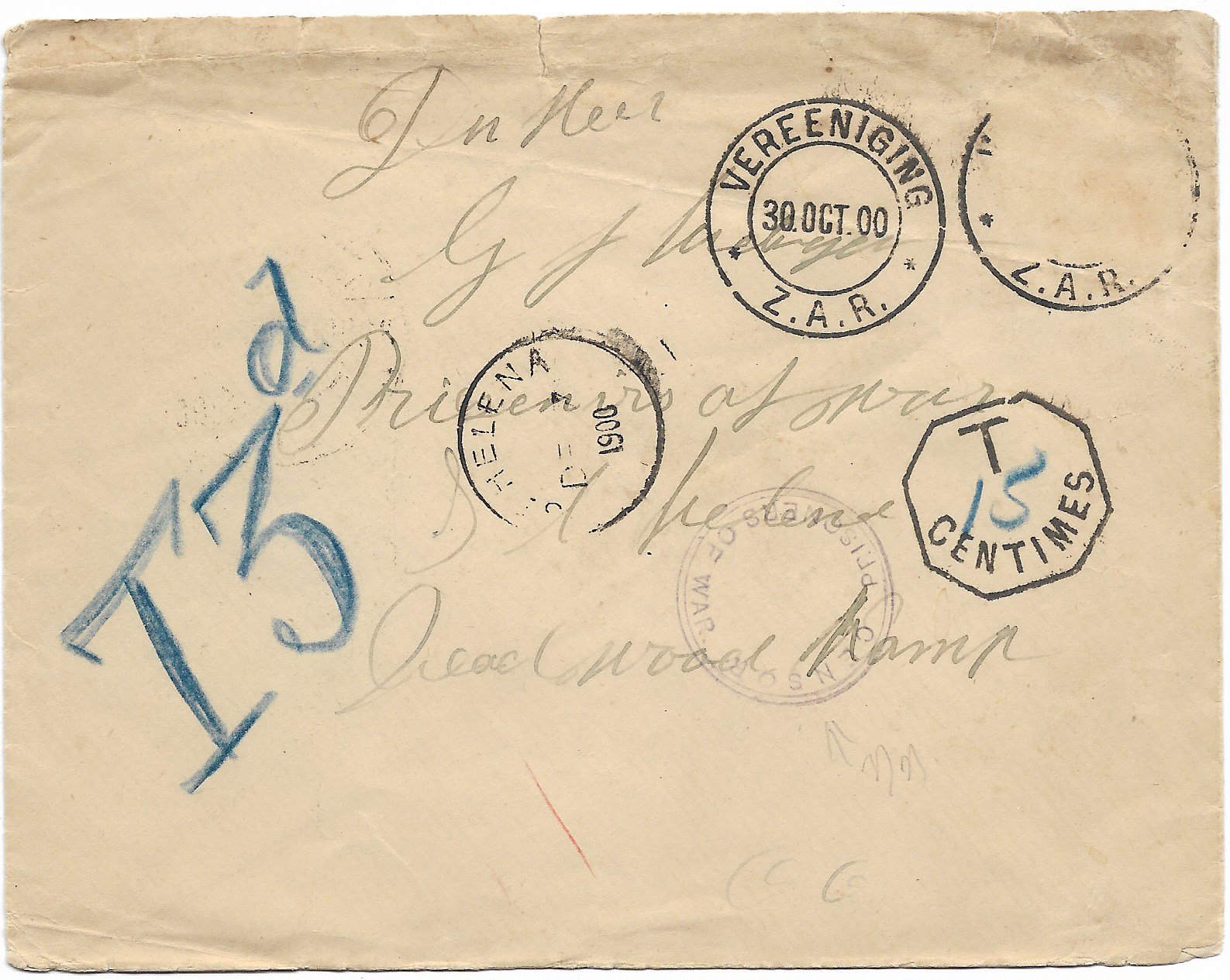 Use of civil mail to contact Boer prisoners of war. Example unpaid to St Helena – taxed probably because the sender used an invalid ZAR stamp which was removed.

The Second British Occupation. Government Mail during the War

As the military campaign entered the phase of the guerrilla war, the British government began to plan for the end of hostilities at first by treating the Transvaal and the Orange River Colony as a single unit for administration, including postal services. Practicalities dictated that the republics’ railway system could function as Imperial Military Railways, but the postal systems were much more complex. As civil administration replaced military government, the administration devolved into departments whose correspondence was free to use the civil posts. The GPO jealously oversaw the names of those authorised to use this privilege. This letter (actually enclosed) from the Secretary of Education E.B.Sargant was censored and carried free as shown by the red cachet. 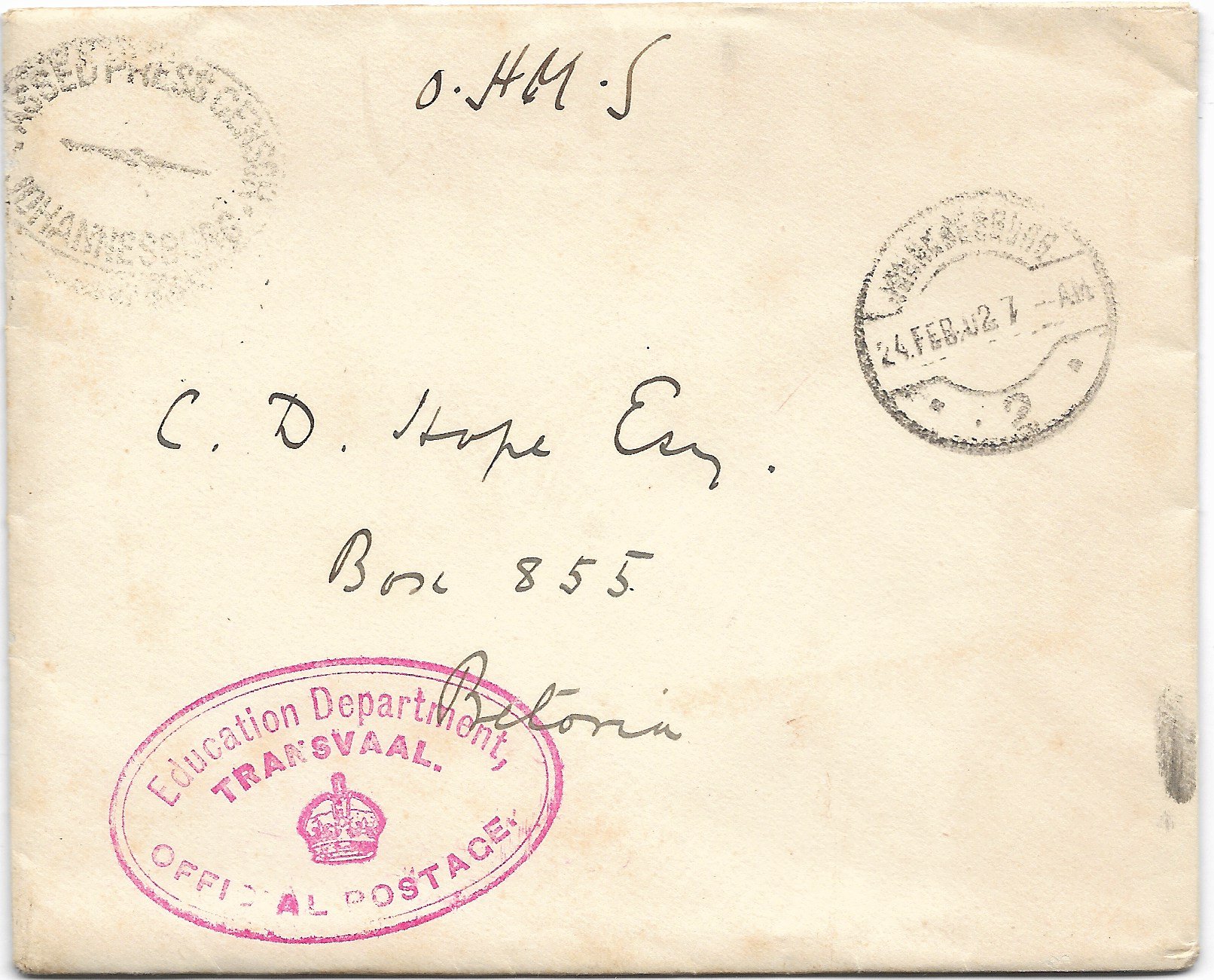 Posted Johannesburg 24 Feb.1902 received Pretoria on the same day. The post office made an example of improper use made of the franking system by a government official for advertising a flower show to all box holders in Pretoria in September 1902.

The Military government quickly put in hand the supply of new designs of postage stamps portraying the profile of King Edward VII. These after the death of Queen Victoria had to take into account the wishes of the new King, to place the crown on his head and to use a photograph by Fuchs. Until these arrived the public were permitted to use only ZAR stamps overprinted on all available stocks taken over by government. These were initially V.R.I. [Victoria Regina Imperatrix] for 12 values mostly of the last ZAR issue. The £5 green of the Vurtheim series was treated in the same way. From March 1901 [Edward Rex Imperator] was used. A temporary shortage of halfpenny stamps was overcome by overprinting the 2d value not originally included in the set of five such stamps. 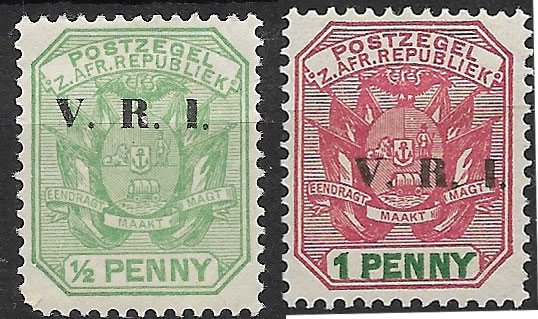 Civilian Mail before the end of the War

From March 1901 [Edward Rex Imperator] was used. A temporary shortage of halfpenny stamps was overcome by overprinting the 2d value not originally included in the set of five such stamps. Mail to prisoner of war to camp set up for those who crossed into Portuguese territory, bearing postage of 2½d including the provisional halfpenny on 2d, plus 4d registration with two more ERI overprinted ZAR 1d bi-colour stamps on the reverse. Posted Johannesburg 30 Jan 02, transit London 22 Feb 02, arrival A.Beira Alta 25 FEB 02. It was signed off by the censor on 30 Jan 02. 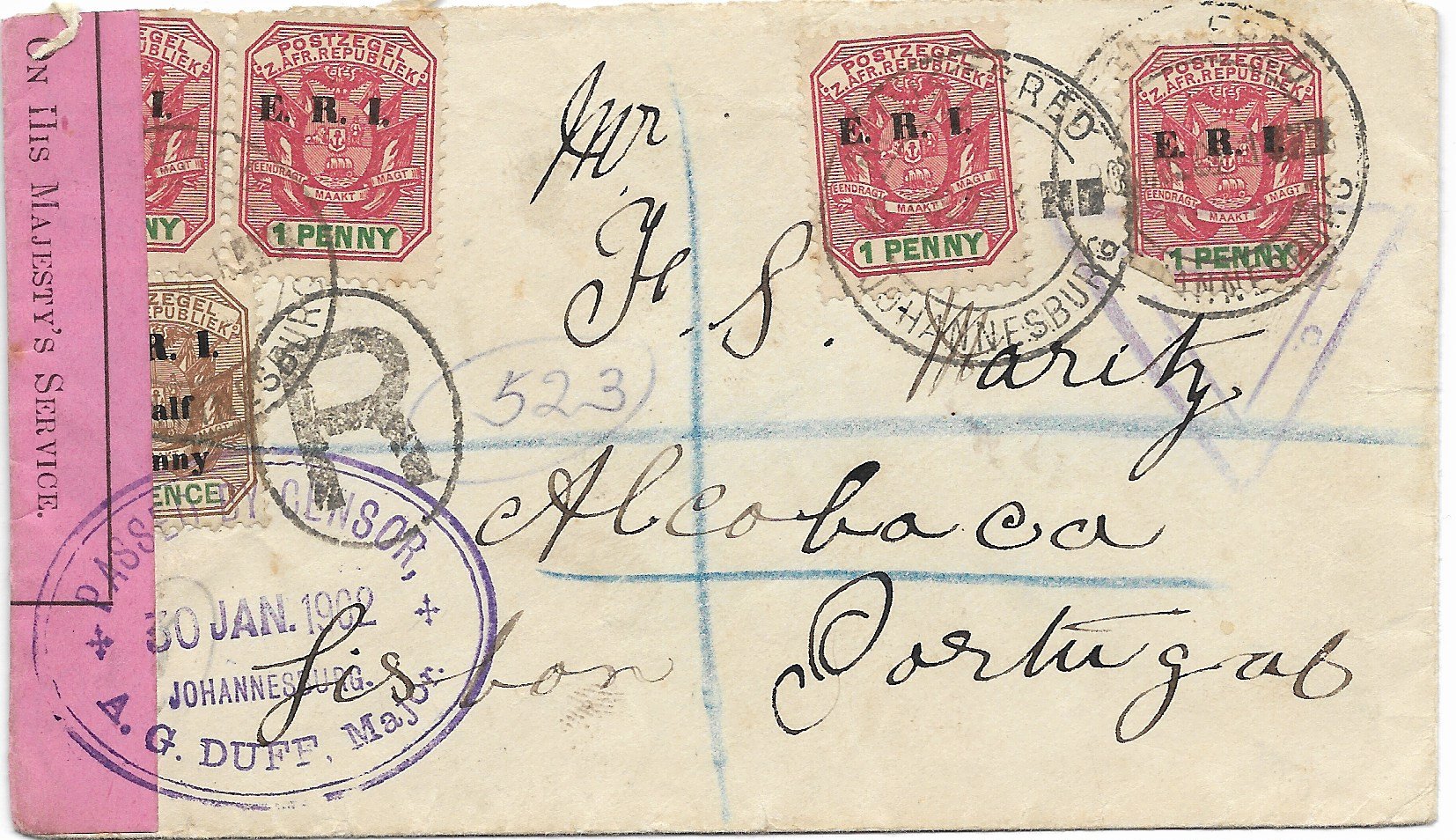