Enjoy the benefits of membership for just £10.00 per year

Find out more about the fascinating story of Transvaal postage history

Our new constitution is available for review in the members’ area.

The minutes of our February General Meeting are now available for members. Click here to view.

We are looking for a webmaster.
Click here to find out more.

The Transvaal Study Circle was founded in 1965 by twenty philatelists whose common interest was South Africa, but specially of Transvaal. From the start its membership was international including individuals from UK, South Africa and the Netherlands, soon to be joined by several from USA. Its purpose was to share information by publishing and display of items of interest at meetings. A journal called The Transvaal Philatelist saw life early in 1966 and was roneoed before and stapled four times a year.

We were established to serve the interests of those who focused on a classic area of stamp collecting, rarely treated in the British philatelic literature, but whose stamp issues are complex, fraught by reprints and forgeries, and presenting many challenges. Our work is concentrated on the land formerly called or administered by the ZAR or Transvaal at any time between the 1830s and 1913. It also includes smaller administrations who issued stamps or ran postal services. See the map below here. Areas and locations are indicative only. 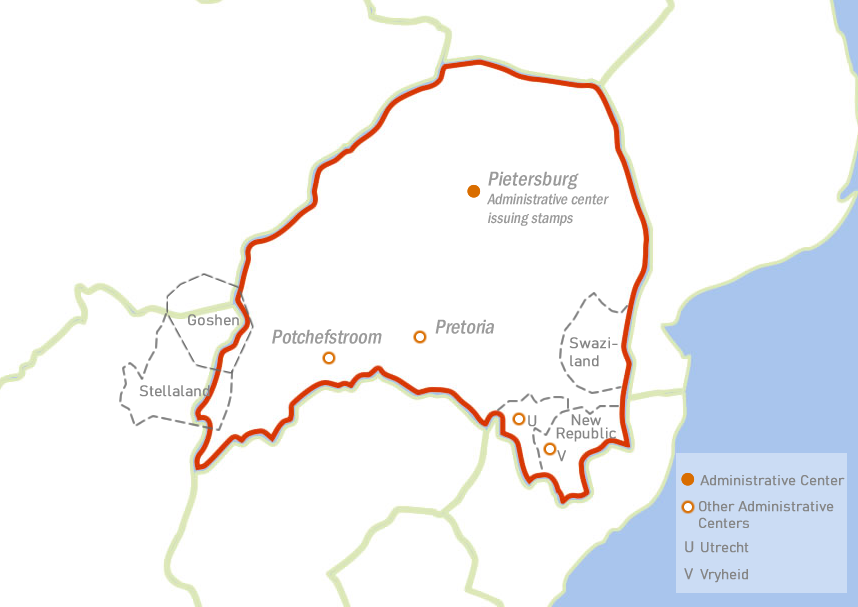 Previous knowledge of Transvaal’s stamps had been published in magazines and a compendium which treated stamps and postal stationery of the British Empire in Africa first in 1905 and then in 1940 and 1948. None of these sources were well known by the 1960s. Interest in South Africa had been generated by a referendum to become a republic after half a century of being a union of two British colonies and two independent republics to their north. These had been enmeshed in the second Anglo-Boer War which had drawn in soldiers and supporters from the British Empire and European countries. Another specialised philatelic society had already been established in 19xx but covered the whole of southern Africa. It was decided not to stray into its field of interest at the time. Now we recognise that the war was the hinge of change increasing the pace of change in postal matters. The duplication of postal systems (military, civil and administrative) will now be examined in detail in war time.

Not averse to the challenge of distinguishing different printings of a small number of stamps attempting to make sense of catalogue listings, the group soon turned to postal markings and postal history, which had generally been neglected in earlier writing and displays. Changes in the geo-political situation of South Africa pushed philatelists further into studies of a postal system that served a limited number of letter-writers and merchants in the space of two decades to one capable of operating a mailing operation for a growing industrial region around Johannesburg as well as one which served a scattered rural population. Migration from Europe brought an urban society thirsty for international communication by rail, post and telegraph services. These were relied upon by government and military bodies and both commercial and private sectors.

Our study circle is organised on traditional lines and run by a chairman and officers elected at an annual meeting, assisted by a small committee which has non-British representation. We are a non-profit-making society to which members subscribe to its cost of management and reinvesting any surplus towards the cost of enlarging the stock of information on Transvaal. We achieved this by publishing research findings with the intention of explaining the nature of changing postal arrangements through archives and surviving postal material. Our aim is to explore the fast diminishing aspect of the area’s heritage.